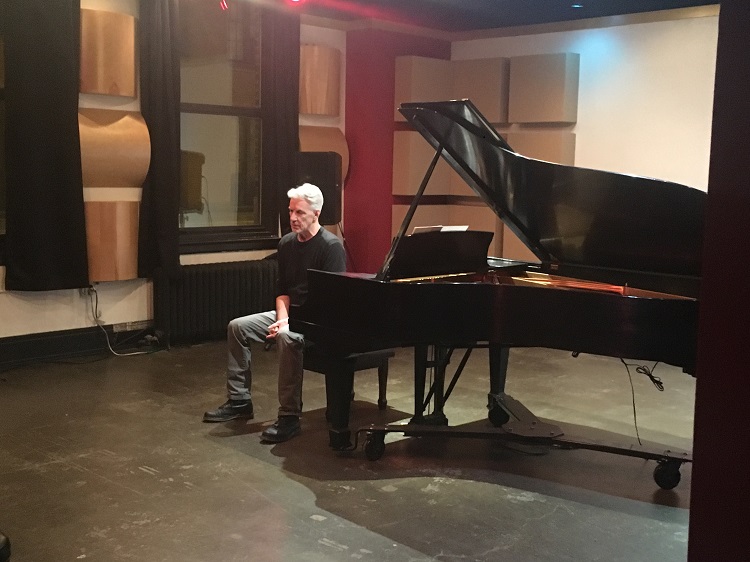 Jesse Goin is one of the more insightful writers on the subject of improvised music and he has also been one of its most active programmers, making Minneapolis/St. Paul a place where on an especially good day you might find Keith Rowe, Toshimaru Nakamura or the duo of Isabelle Duthoit and Franz Hautzinger playing music. The work, taste and vision that inform Goin’s writing and programming are immediately evident in his music, presented as this is the new age, in person. Goin recounts the process by which he came to make this music: “In the summer of 2019 a musician friend gave me an electric guitar, a tube amp, and a couple of pedals to play with; I have played acoustic guitar for many years, but had never handled an electric guitar. For a good long time I have wanted to make drone music … first thought / best thought.”
The music goes beyond the modesty of Goin’s description, its virtue embodied in his patience, a mature willingness to let sounds come to inhabit the fullness of their meaning. It’s wonderfully slow, reverent and resonant music, music of inspired focus, created during chaotic times. A recognizable guitar arpeggio does not occur until about 75 minutes into the long program, while his particular use of pedals blurs the original sonic profile of the guitar, the sound often closer to an organ, with a sense of scale that can suggest a cathedral of the imagination, transported to a natural environment, a shore, a canyon.
The music is consistently meditative, even revelatory, achieving a oneness with sound and space that’s specifically connected to a Buddhist vision in two of the five pieces. “How wonderful it would be,” the second of five tracks, is an initial deviation, adding the spoken voice of Sarah Dresher chanting “the four immeasurables of Mahayana Buddhism.” The sound here is expanded. There are singing bowls, sounding like gongs, sustained tones that appear with piano-like evenness of tone and “drones” listed as a separate component, sounding here like an Indian harmonium. “Wave 2”, one in a series of three expansive meditations, employs a recording of Shunryu Suzuki, speaking at the San Francisco Zen Center sometime in the 1960s, his brief utterance becoming one with the droning sounds that seem to embrace his words.
Stuart Broomer
Stuart Broomer is a Canadian editor, music critic, pianist, writer, jazz historian, and composer. He is a former editor with CODA magazine and currently works as an editor at Coach House Books. He has written articles for Amazon.com, The Globe and Mail, Toronto Life, Down Beat, Musicworks, Cadence Magazine, ParisTransatlantlic and Signal to Noise. His book Time and Anthony Braxton was published by Mercury Press in 2009. He is a member of the music faculty at George Brown College.
Broomer is a graduate of The Royal Conservatory of Music where he studied music composition and piano with Samuel Dolin.

Jesse Goin brings a lifetime of serious listening to an extraordinarily wide range of music, writing from a poetic sensibility that brings unique insights to the reader, uncovering hitherto unnoticed valuable aspects and relationships, allowing his readers a much deeper appreciation of the work at hand.
Brian Olewnick
Brian Olewnick writes about music on his long enduring blog Just Outside. His biography of Keith Rowe, improvising musician and founding member of AMM, was published in June 2018 by powerHouse Books; a labor of love, an improbable patience, and served by  an intimate friendship with its subject, Keith Rowe: The Room Extended is highly recommended.

Prefacing a 2015 essay, Jesse Goin borrowed a choice quotation from the master trumpeter and composer Bill Dixon: “…stripping away the filigree, go to the center.” The beauty of Jesse’s writing about music is that he never forgets that directive; his prose reads cool and clear like poetry, yet never becomes self-absorbed or loses sight of the music it’s meant to serve.
Steve Smith
Former director of publications at National Sawdust; music editor for the Boston Globe, Time Out New York, freelance reporter and reviewer for The New York Time, Rolling Stone., the Washington Post, Village Voice, The Wire, Down Beat, Chamber Music, and Symphony magazine

Several years of thoughtful, musically-bent blogging by Jesse Goin in Minnesota. Check out the interesting piece about the journal Reductive’s issue related to the theme of interior silence (June 2015). There are many more meditations on musical ideas located throughout this blog.
Thom Holmes
Composer, publisher and editor of the magazine Recordings of Experimental Music from 1979 to 1985; working with John Cage, Holmes created and maintained the only discography of Cage’s music authorized by the composer.

Jesse Goin has written about experimental music for a variety of electronic and print journals, including Paris Transatlantic, The Wire, Dusted, Compost & Height and, since 2010, his blog crow with no mouth.

From 2011 to 2017, operating as crow with no mouth promotions, Goin curated a concert series in the Twin Cities, presenting music seldom heard in the Midwest. To date the crow concert series has presented 98 musicians from 13 countries in 42 concerts. The majority of these events presented musicians in their Minnesota debuts, including Keith Rowe, Michael Pisaro, Jürg Frey, Hong Chulki, Olivia Block, Tetuzi Akiayama, Toshimaru Nakamura, Nate Wooley, Reinier van Houdt, and many others.

If you wish to discuss submitting music for a possible review / feature, contact crow at Jessewgoin@gmail.com

Here are some other ways for us to connect:
Twitter ~ JesseG58
Instagram ~ goinjesse
Podomatic ~ jessewgoin19913
crowwithnomouth.com
crow music on bandcamp