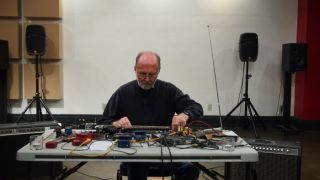 the table was set for a “compression” of the music presented in the six previous cities of this u.s. tour.

keith had talked at length over dinner, with great animation, about the horrors of dresden as they are told in shostakovich’s eighth string quartet; i decided to play it at studio z as keith set up and people came and settled in.

before sitting down to play, keith told the audience of being in plymouth during the blitz, and running downstairs at the air raid sirens to get in a cage under the table, and wait.

the set was brilliant; with a low-volume buzzing, indistinct radio and a sustained  drone continuing, keith rose and addressed the audience. exchanges with several audience members went 20-30 minutes. 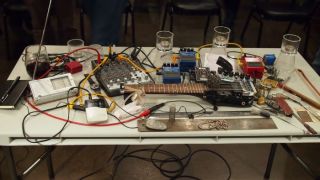 the preparations were in part specifically for keith’s performance the night before in chicago of frank abbinanti’s city music (1988), which, along with some cardew, was integrated into the crow performance.