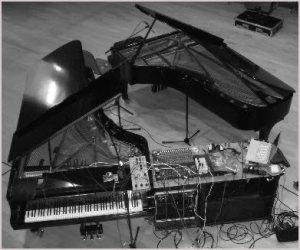 A very brief note to encourage readers to hear the duo recording of Stephen Cornford and Samuel Rodgers released several months ago on the Another Timbre imprint, Turned Moment, weighting.
The title may read as obtuse, but the sound world explored on this release is anything but. The duo generate a floating field of pin-prick, crystalline feedback, piano strings prepared in media res [the recording is taken from several hours of their improvising, edited by Cornford] and, here and there, struck piano keys. I have vowed to myself to write about this area of music without using the by now codified adjective Feldmanesque; I may now have to take up that vow after this write up.
The sound sources are two pianos and a feedback system Cornford designed that allows unstable, aleatory and sometimes noisy sounds to infiltrate the sober piano tones. Suspended pitches hang in the air with small, barely-controlled feedback squalls. Overall, with Cornford’s post-production work, the three sections never spin out of orbit, the center holds.
Anyone who liked the territory explored in the Tilbury/Schmickler release Variety, or Paiuk/Kahn’s beautiful Breathings will want to check this out. As in those two antecedents, there is an interface of piano and lacings of nuanced electronics. Cornford has very consciously chosen the instrument arguably most history-burdened and exhaustively plumbed for radical musicans, determined to find something new to say nonetheless. The results of this duo’s intimate meeting merits close, repeated listens.

One day I said to myself that it would be better to get rid of all that—melody, rhythm, harmony, etc. This was not a negative thought and did not mean that it was necessary to avoid them, but rather that, while doing something else, they would appear spontaneously. We had to liberate ourselves from the direct and peremptory consequence of intention and effect, because the intention would always be our own and would be circumscribed, when so many other forces are evidently in action in the final effect.